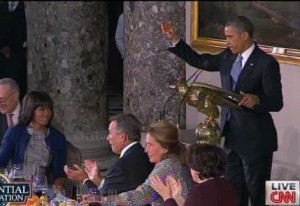 On Monday afternoon, President Obama and Vice President Joe Biden offered toasts during the inaugural luncheon. The president noted that while there were “profound differences” among those in the room, he was thankful for everyone’s service.

Before Obama spoke, Biden reflected on past luncheons, appreciating the way the bring everyone together. “It really is the place where we get together in a different way than every other time we gather,” he said, also remarking, “I used to enjoy this lunch more than anything we did in the Capitol.”

For his part, Obama spoke directly to Biden, congressional leaders, and all other members of Congress to offer a “thank you” for their service to “try to advance the cause progress in this country.” He specifically noted the sacrifices made my those in his Cabinet.

“I recognize that democracy is not always easy,” Obama remarked, expressing confidence that they can act in a way that makes a difference. About the presidency itself, he commented on its irony: “The longer you are there, the more humble you become.”