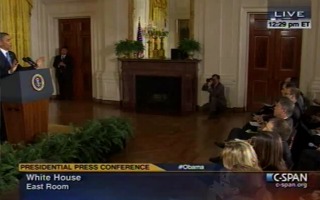 During a Monday press conference in the White House, President Barack Obama was asked about his seeming lack of interest in socialization with other members of the political establishment in Washington. Obama said that, while he is a friendly person, it takes two to socialize and Republicans are generally not interested in being seen with him. He blamed “media that is preferred by Republican constituencies” for creating an environment in which a Republican politician seen with Obama has to fear a primary fight in their next election.

RELATED: Obama: GOP ‘Will Not Collect A Ransom In Exchange For Not Crashing The American Economy’

President Obama said he does socialize with members of Congress from the other party on a regular basis and they have a good time when they do interact on a casual basis.

“That doesn’t prevent them from going onto the floor of the House and, you know, blasting me for being a big spending socialist,” Obama said to laughs from the assembled reporters.

“The reason that, in many cases, Congress votes the way they do, or talks the way they talk, or takes the positions in negotiations that they take doesn’t have to do with me, it has to do with imperatives they feel in terms of their own politics,” Obama continued. “They’re worried about their district. They’re worried about what’s going on back home.”

“I think there are a lot of Republicans at this point that feel that, given how much energy has been devoted in some of the media that is preferred by Republican constituencies to demonize me, that it doesn’t look real good socializing with me,” Obama added. “Charlie Crist down in Florida testifies to that.”

Crist fought and lost a primary election against Sen. Marco Rubio during Florida’s 2010 U.S. Senate election campaign. Some blamed his appearance hugging Obama in a photograph for Republican voters’ embrace of Rubio’s candidacy. Obama said that Republicans avoid socializing with the president in order to avoid a primary fight in their next election.