Obama: GOP Tactics Make America ‘Look Like We Don’t Have Our Act Together’
VIDEO

Obama: GOP Tactics Make America ‘Look Like We Don’t Have Our Act Together’ 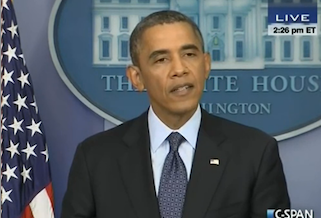 Towards the end of his opening statement at Tuesday’s press conference, President Obama relayed the negative effects he believes the current crises over the budget and debt ceiling are having not only here in the United States but around the world. “Whenever we do these things,” Obama said, “It hurts our credibility around the world. It makes it look like we don’t have our act together.”

The president once again laid out his willingness to negotiate with Republicans over the budget and even the issue of health care, but only after the government shutdown ends and the debt ceiling is raised. “I don’t believe any party has a monopoly on good ideas,” Obama said. “So I’ve shown myself willing to go more than halfway in these conversations.”

But at the same time, he denounced Republicans’ tactics. “We can’t make extortion routine as part of our democracy,” Obama said. “Democracy doesn’t function this way. And this is not just for me. It’s also for my successors in office, whatever party they’re from. They shouldn’t have to pay a ransom either for Congress doing its basic job.”

Obama then turned to the international impact of the shutdown, noting that he’s had to miss “critical meetings” in Asia this week because of the continued shutdown. While he said he did not expect “long-term damage” from the current crisis around the world, he stressed that it “hurts our credibility” and “makes it look like we don’t have our act together.”

“The greatest nation on earth shouldn’t have to get permission from a few irresponsible members of Congress every couple of months just to keep our government open or to prevent an economic catastrophe,” Obama said.