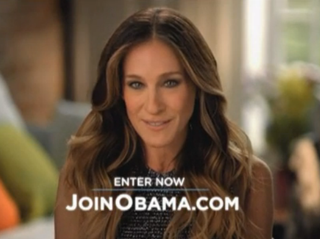 As announced last month, the Obama 2012 campaign debuted their first national campaign ad during tonight’s MTV video awards, with Sarah Jessica Parker baby-talking an audience about “the guy who ended the Iraq War” and “created four million jobs.” “That guy,” she explains, will be at her house for a fundraiser soon, and “he needs you.”

The ad was clearly targeted for a specific audience– the kind that needs things spelled out for them, like who “President Barack Obama” is, apparently. In a peaceful voice, with a camera angle that makes one feel like Parker is a caring parent who is about to explain something very important about the meaning of life to you, Parker explains that “the guy who says you should be able to marry anybody you want” needs the help of voters, and that he will be “at my house” in the future.

The message of the ad and it’s shameless politicizing of things like President Obama’s stance on gay marriage (which changed only with the winds of popular opinion) aside, there is something incredible condescending about it all– calling the President “a guy,” trying to emphasize how cool that “guy” is because he hangs out with the lady from Sex and the City. On the other hand, Parker’s ad is directed to an audience who knows who Josh Hutcherson is at all, so can you blame them?

The ad as aired on MTV below: