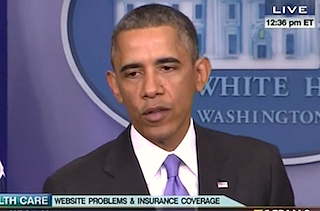 During a press conference on Thursday, President Barack Obama did not express confidence that the Affordable Care Act federal exchange website would be fully functional by the November 30 deadline, but did promise that incremental improvements were being made.

“It’s fair to say that the improvement will be marked and noticeable,” Obama said. “The website will work much better on November 30th, December 1st than it worked—certainly on October 1st, though that’s a pretty low bar. It’ll be working a lot better than it was last week. It will be working better than it was this week. Which means the majority of people who go to the website will see a website that is working the way it’s supposed to. I think it is not possible for me to guarantee that 100% of the people, 100% of the time going on this website will have a perfectly seamless, smooth experience.”

RELATED: CBS’s Major Garrett Confronts Obama on Broken ‘Keep Your Plan’ Promises: ‘Do You Regret It?’

“There’s going to be a lot of evaluation of how we got to this point,” Obama said. “The federal government does a lot of things really well. One of the things it does not do well is information technology procurement…Now, I think we have to ask ourselves some hard questions inside the White House as opposed to why we didn’t see more of these problems coming earlier on, so we could set expectations.”

“I am very frustrated,” Obama said, and in one of several football metaphors, added, “but I’m also somebody who, if I fumbled the ball, I’m going to wait until I get the next play and try to run as hard as I can, and do right by the team.”

Watch the full clip below, via CSPAN-3: