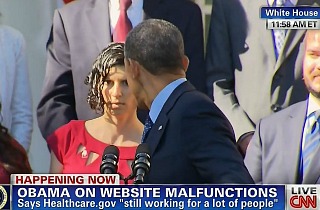 During President Obama‘s Monday morning speech on Obamacare, one of the policy’s supporters standing in the background became faint and nearly collapsed. The president interrupted his address and caught the fainting ACA beneficiary before she fell forward.

“This happens when I talk too long,” Obama said after catching and helping to escort the fainting supporter off stage.

UPDATE: The fainting woman has been identified as Karmel Allison, a pregnant woman with Type 1 diabetes. From a White House pool report:

The woman who nearly/briefly fainted during President Obama’s health care speech today has been identified by the White House as Karmel Allison.

She recovered and walked away as the audience applauded.

She later wrote on Twitter: “I’m ok world- just got a little lightheaded.Thanks, @BarackObama for catching me! And good thing this pregnant diabetic is pregnant :)”

Per an earlier WH description of people who stood with POTUS, Allison is a “prospective ACA beneficiary.”

“Karmel Allison was diagnosed with Type 1 Diabetes when she was nine years old,” a White House description read. “She has stayed on the same insurance ever since, despite constantly rising costs, for fear she would not be able to find a plan that would cover her due to her pre-existing condition. Allison recently began researching her options on CoveredCA and has publically described her experience as finally feeling equal to others, including her young and healthy husband, when it comes to access to coverage.”

Karmel, wearing a red dress, got wobbly toward the end of Obama’s lengthy speech and was assisted by others standing with POTUS. The president stopped his speech to turn to her, as aides came over to help.

“This happens when I talk too long,” Obama said.(check official White House transcript for remarks.)

Allison is from San Diego, according to her Twitter page.

A bio at the website A Sweet Life (http://asweetlife.org/contributors/karmel-allison/) reads:

“Karmel Allison was born in Southern California, diagnosed with Type 1 Diabetes at the age of nine, and educated at UC Berkeley. Karmel now lives in San Diego with her husband, where she is loving the sunshine, working in computational biology at the University of California, San Diego, and learning to use the active voice when talking about her diabetes. In her spare time, Karmel enjoys people, Milan Kundera, rock climbing, and the pursuit of life, liberty, and happiness.”

UPDATE #2: Allison spoke out about the incident on Piers Morgan‘s show Monday night.

Watch the moment via CNN: