Obama: Civil Servants Noble, But ‘Actions Of A Few’ Breeds ‘Cynicism That Threatens Our Democracy’
video

Obama: Civil Servants Noble, But ‘Actions Of A Few’ Breeds ‘Cynicism That Threatens Our Democracy’ 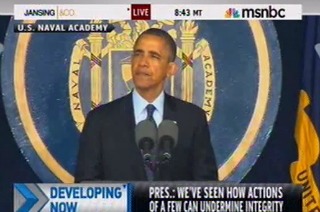 In a speech before the U.S. Naval Academy’s graduating class of 2013, President Barack Obama touched on themes relating to the ongoing scandals surrounding the Internal Revenue Service’s targeting of conservative groups and the Department of Justice’s sweeping subpoenas of reporters’ communications records. Obama praised the spirit of public service that guides America’s civil servants but also chastised the “actions of a few” which can “further erode the peoples’ trust in their government.”

“It’s no secret that many Americans have lost confidence in many of the institutions that have helped shape our society and our democracy,” Obama began. “But I’m here to stress to you that institutions do not fail in a vacuum. Institutions are made up of people.”

President Obama used the example of the 2008 financial crisis, saying that most of the people who work in the financial sector did their jobs faithfully and admirably. However, he noted that the “actions of a few can undermine the integrity of those institutions.”

RELATED:On ‘Scandals’, President Obama Should Borrow From An Unfamiliar Playbook: Bush And Cheney

“All too often, we have seen the politic where is compromise is rejected as a dirty word and policies are directed as special interests,” Obama continued. “And that breeds a cynicism that threatens our democracy.”

Obama turned to America’s civil servants. He said that, like those in the financial sector whose selfish actions cast a negative light on the investment sector, the actions of a select few have diminished Americans’ faith in their civil servants.