Obama Condemns IRS Targeting Conservative Groups: ‘This Is Outrageous’ And ‘I Will Not Tolerate It’
video

Obama Condemns IRS Targeting Conservative Groups: ‘This Is Outrageous’ And ‘I Will Not Tolerate It’ 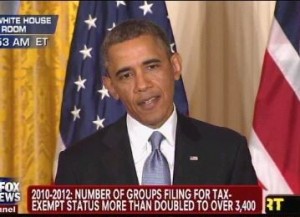 During a press conference in the White House on Monday, President Barack Obama was asked about reports that the Internal Revenue Service targeted conservative groups for added scrutiny over the course of the last two years. The president condemned the actions of members of the IRS who enforced federal tax laws in a partisan fashion. “I’ve got no patience with it,” Obama said. “I will not tolerate it.”

“I first learned about this from the same news reports that I think most people learned about this,” Obama began. “This is pretty straightforward. If, in fact, IRS personnel engaged in the kind of practices that have been reported on and were intentionally targeting conservative groups, then that’s outrageous.”

“You should feel that way regardless of party – I don’t care whether you’re a Democrat, independent, or Republican,” the president added. He said that the perception that the IRS is biased is something people should be “properly concerned about.”

“I can tell you that if you’ve got the IRS operating in anything less than a neutral and nonpartisan way, then that is outrageous, it is contrary to our traditions, and people have to be held accountable and it’s got to be fixed,” Obama concluded.