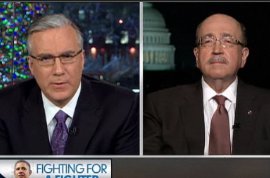 One of the most popular political videos of the last few days involves union leader Tom Buffenbarger stumping for Hillary Clinton during the 2008 presidential race, while saying Barack Obama wasn’t enough of a fighter to take on Republicans. Of course, in the wake of Obama’s compromise with Republicans on extending tax cuts, such criticism found new life, and tonight Keith Olbermann had Buffenbarger on his program to discuss how he thinks a Hillary Clinton presidency would have differed from Obama’s run so far.

Buffenbarger said that while he eventually voted for Obama in 2008, he never wavered in thinking he wasn’t enough of a fighter:

“I was hoping once [Obama] won the nomination…that Barack Obama would come out fighting for the people of America, the working people, the people who make this country hum every day, and I’m still waiting to see that Barack Obama.”

Olbermann then posed a “what-if” scenario to Buffenbarger, asking how he thinks things might be different for the union workers he represents had Clinton won the presidency. Buffenbarger responded that he’s “very confident we would have an advocate for the working people of America,” and that she was the right person to help craft fair trade deals and help avoid “the economic morass we’re in today.” And while it’s possible he’s right about all that, Olbermann’s question that prompted this response had it right – this is strictly a “what-if,” and speculating is easy.

Additionally, Olbermann then tried to eschew hypotheticals and ask Buffenbarger what Obama should do now: “Should he let tax cuts expire for your workers rather than keep taxes low for the rich?” However, Buffenbarger never really answered this, instead detailing how the expiration of the Bush tax cuts wouldn’t have much of an effect on the workers he represents, how paying taxes is a privilege, and that if everyone paid their fair share, “maybe we wouldn’t be in the mess we’re in today.”

Again, though, even if Buffenbarger’s right about all this, and about Obama, he’s again dealing in the “hindsight” Olbermann sought to avoid with his last question, and we wish he’d talked a little more about what he thinks should happen now, rather that what didn’t happen already. Video of the segment, via MSNBC, below.