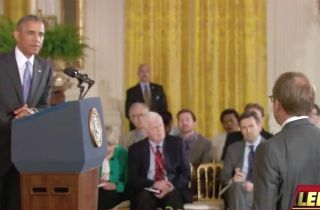 During his big Iran deal presser, President Obama cut off ABC’s Jon Karl before he could ask about some mysterious person named “Donald.”

Karl attempted to fit in as much as he could into his question for the president, first asking if it gives him pause that Syrian dictator Bashar al-Assad praised the deal as a good one for Iran, before asking about the congressional resistance.

Karl then tried to throw in a quick political question, but the president cut him off, and the only word Karl was able to get out was “Donald.”

Well, let’s see here… Karl works for ABC, which is owned by Disney, maybe it was about Donald Duck? Lots of people had their suspicions:

.@jonkarl: "Donald……" Presumably was about to ask a Rumsfeld question.

That was going to be a question about Donald Rumsfeld, right?

Other possible Donalds Karl could have been talking about:

Let us know in the comments below which Donald you think Karl could have possibly been talking about.