Obama Decries ‘Phony Scandals’ That ‘Distract’ From Economic Action: ‘This Needs To Stop’ 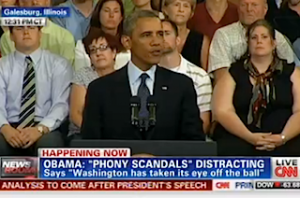 During a major speech on the economy from Knox College in Galesburg, Illinois Wednesday, President Obama aimed some sharp criticism at Washington for “taking its eye off the ball” by succumbing to “an endless parade of distractions, political posturing and phony scandals.” He told the supportive audience in attendance: “I am here to say this needs to stop.”

The president lamented the “gridlock” in Congress in that has only “gotten worse” over the last six months. “If you ask some of these Republicans about their economic agenda, or how they’d strengthen the middle class, they’ll shift the topic to “out-of-control” government spending,” Obama said, “despite the fact that we have cut the deficit by nearly half as a share of the economy since I took office.” Or, even worse, they will bring up the “tried and true” boogeyman of Obamacare, “despite the fact that our businesses have created nearly twice as many jobs in this recovery as they had at the same point in the last recovery, when there was no Obamacare.”

“With an endless parade of distractions, political posturing and phony scandals,” Obama continued, alluding to the uproar from conservatives over the attack in Benghazi, the IRS targeting political groups and the DOJ subpoenaing reporters, “Washington has taken its eye off the ball. And I am here to say this needs to stop.” Instead, he said, “Our focus must be on the basic economic issues that the matter most to you – the people we represent.”

“Rebuilding our manufacturing base. Educating our workforce. Upgrading our transportation and information networks,” the president said to cheers from the crowd. “That’s what we need to be talking about. That’s what Washington needs to be focused on.”

Read the full transcript of Obama’s speech below: