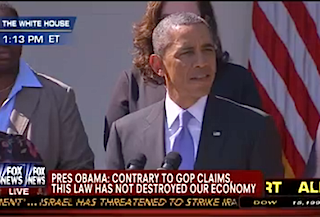 Surrounded by Americans who he said will be helped by the implementation of the Affordable Care Act, President Obama condemned “one faction of one party, in one house of Congress, in one branch of government” for shutting down major parts of the government “all because they didn’t like one law.”

The president decried a “Republican shutdown” that he said did not need to happen. “They’ve shut down the government over an ideological crusade to deny affordable health insurance to millions of Americans,” Obama said. “They demanded ransom just for doing their job.” After informing the public of the many government services that have been shuttered starting Tuesday, Obama urged Congress to come to a resolution, saying, “We know that the longer the shutdown continues, the worst the effects will be.”

“I know it is strange that one party would make keeping people uninsured the centerpiece of the agenda,” Obama continued, “but that apparently is what it is. Of course, what is stranger still, is that shutting down our government doesn’t accomplish the stated goal.” He stressed that the Affordable Care Act is moving forward as scheduled today, with more than 1 million people visiting HealthCare.gov this morning alone.

At one point during the 20 minute speech, President Obama employed an analogy to Apple’s new iOS7 operating system that demonstrated how frustrated he is with Republicans who opposed Obamacare at every turn. “Just a few weeks ago,” Obama said, “Apple rolled out a new mobile operating system. And within days, they found a glitch and so they fixed it. I don’t remember anybody suggesting that Apple should stop selling iPhones or iPads or threatening to shut down the company if they didn’t. That’s not how we do things in America. We don’t actively root for failure.” Reiterating that he’s willing to work with Republicans to improve the law, he said, “We get to work and make things better and we keep going.”

The president closed by assuring Republicans that he has no plans to negotiate over the upcoming debt ceiling deadline, saying that if they “force the United States to default on its obligations for the first time in history, it would be far more dangerous than a government shutdown.”