Obama Defends ‘Ground Zero Mosque’: “We Are Not At War Against Islam” 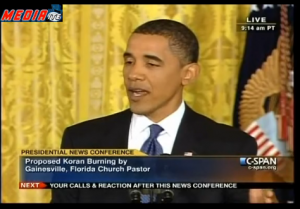 Today, Barack Obama unambiguously defended Park51’s right to exist. After Fox News correspondent Wendell Goler asked the president to “weigh in on the wisdom of building a mosque a couple of blocks from Ground Zero,” the Commander-in-Chief responded with resonant—if not exactly original—words about the United States’ dedication to upholding individual liberties:

The president also reiterated that every Muslim should not be targeted as an enemy of America:

We are not at war against Islam. We are at war against terrorist organizations that have distorted Islam, or falsely used the banner of Islam to engage in their destructive acts. We’ve got to be clear about that. … If we’re going to successfully reduce the terrorist threat, then we need all the allies we can get. The folks who are most interested in a war between the United States and the west or Islam are Al Qaeda. That’s what they’ve been banking on. … The overwhelming majority of Muslims around the world are peace-loving.

Despite the statements he made at today’s press conference, President Obama has not always been forthcoming with his opinions on the Islamic center. Last month, he told CNN’s Ed Henry that he “was not commenting and will not comment on the wisdom of making a decision to put a mosque there”—just one day after apparently voicing his support for the construction of the center at a White House dinner.

Opponents of the mosque’s protesters should be relieved to hear the President speaking decisively about Park51. Still, the mere fact that Obama is still answering questions about it indicates that this issue isn’t likely to leave the news any time soon.