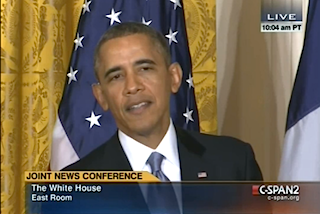 During a joint press conference with French President François Hollande Tuesday, President Barack Obama addressed the controversy that sprung up around the Congressional Budget Office’s recent report that showed how the equivalent of 2.5 million jobs could be eliminated due to the Affordable Care Act. The president explained that rather than “killing jobs” as some people have described the report’s findings, Obamacare merely “gives people flexibility” in terms of what work they choose to pursue.

Obama began by describing the “historical accident” that caused American health care to by tied to employment in a way that isn’t the case in the rest of the developed world. While he said it has “worked” for a number of decades, it has also meant a greater burden on employers and an unfair situation for the self-employed and independent contractors.

“I don’t think an employer-based system is going to be — or should be — replaced anytime soon,” Obama said, “but what the Affordable Care Act does do is give people flexibility. It says if I’m working at a big company like IBM or Google and I decide I want to start my own company, then I’m not going to be inhibited from starting a new company because I’m worried about keeping health insurance for myself and my family.”

The president proceeded to lay out some examples that included a woman who wants to work with her husband on a family farm but, under the old system, would not have felt secure giving up the health insurance that came with her job at the county clerk’s office. “It’s giving people more flexibility and more opportunity to do was make sense for them,” Obama said. “Ultimately I think that is going to be good for our economy.”