Obama Defends Fight Against ISIS: ‘Anything We Could Be Doing, We’re Doing’ 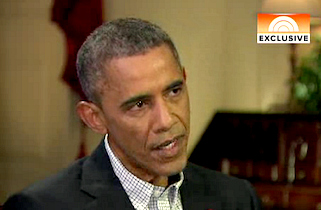 Following up a softball pre-game beerterview from last night, NBC’s Savannah Guthrie pressed President Barack Obama on the fight against ISIS in Syria and Iraq and the deteriorating situation in Yemen.

“Part of our goal has to be to build up capacity inside Iraq so that it’s not American troops in Iraq,” Obama said. “Some of those same critics, I imagine, would have us redeploy tens of thousands of U.S. troops.”

“It is entirely possible for us to deploy 200 or 300,000 U.S. troops,” Obama said, to Guthrie’s objection that he was employing a strawman. “If we don’t have inside of Iraq or inside of Syria or inside of Afghanistan both he capacity and will of people to fight for themselves, then any gains that are made eventually dissipate. So this takes longer, but it’s the right way to do things.”

“Anything that we could be doing, we are doing,” Obama insisted. “Folks are frustrated, often times because they want quick resolutions of these issues.”

Guthrie challenged Obama over whether radical jihadism had grown on his watch. Obama cited the general unrest in the region, but emphasized that America had been kept safe.

“This is not a situation in which we’ve seen, during this period, as tumultuous as it is, significant attacks directed at the U.S. homeland,” Obama said. “I believe we are safer.”