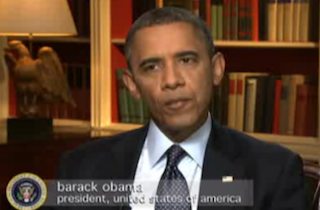 In an 45-minute interview that aired Monday night, President Obama spoke with Charlie Rose about several timely issues including the NSA and Syria. The president defended his administration’s approach to surveillance, not taking much liking to the Dick Cheney comparisons — and said the public’s uneasiness could be attributed to them “not getting the complete story.”

The debate (which of course he welcomes) has gotten “cloudy,” Obama said, seeking to reassure Americans that the programs are transparent.

“What I’ve asked the intelligence community to do is see how much of this we can declassify without further compromising the program. … Because frankly, if people are making judgments just based on these slides that have been leaked, they’re not getting the complete story,” he argued. “To say there’s a tradeoff doesn’t mean somehow that we’ve abandoned freedom.”

With all the talk about snooping into emails and phone calls, the president further wanted to clarify that “if you’re a U.S. person, then NSA is not listening to your phone calls, and it’s not targeting your emails, unless it’s getting an individualized court order.”

He also tackled the Bush/Cheney comparisons that have been popping up since news about the NSA broke:

“Some people say, ‘Well, you know, Obama was this raving liberal before. Now he’s, you know, Dick Cheney.’ Dick Cheney sometimes says, ‘Yeah, you know? He took it all lock, stock and barrel.’ My concern has always been not that we shouldn’t do intelligence gathering to prevent terrorism, but rather are we setting up a system of checks and balances.”

Rose noted on CBS This Morning that the president wanted Americans to “feel and see his thinking” on the issue.

Watch a clip below, via CBS This Morning (full interview here):