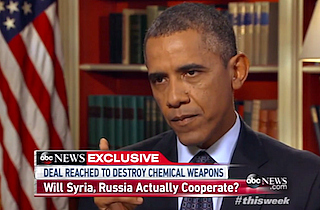 On This Week With George Stephanopoulos Sunday morning, President Barack Obama defended his handling of the Syrian crisis, arguing that his administration’s response was less stage-managed than the Iraq War but ultimately more successful at achieving its goals.

“Folks here in Washington like to grade on style,” Obama said in response to Stephanopoulos’ recounting of some “armchair criticism” the president has taken. “Had we rolled out something that was very smooth and disciplined and linear, they would have graded it well, even if it was a disastrous policy. We know that because that’s exactly how they graded the Iraq War.”

“I’m less concerned about style points, I’m much more concerned about getting the policy right,” Obama said. “What I’ve said consistently throughout is that the chemical weapons issue is a problem, I want that problem dealt with. As a consequence of the steps that we’ve taken over the last two to three weeks, we have a situation in which Syria has acknowledged it has chemical weapons, has said it’s willing to join the convention on chemical weapons, and Russia, its primary sponsor, has said it will pressure Syria to reach that agreement. That’s my goal. And if that goal is achieved, then it sounds to me as if we did something right.”

He also maintained that Iran would not be emboldened by the lack of strikes in response to Syria’s use of chemical weapons to further develop nuclear weapons.

“What the Iranians understand is that the nuclear issue is a far larger issue for us than the chemical weapons issue, that the threat against Israel that a nuclear Iran poses is much closer to our core interests, that a nuclear arms race in the region is something that would be profoundly destabilizing,” Obama said.

“They should not draw the lesson that we haven’t struck to think that we won’t strike in Iran,” Obama continued.

“On the other hand, what they should draw from this issue is that there is the potential of resolving these issues diplomatically. I think they recognize, in part because of the extraordinary sanctions that we’ve placed on them, that the world community is united when it comes to wanting to prevent a nuclear arms race in the region. Negotiations with Iranians is always difficult. I think this new president is not going to suddenly make it easy. But my view is if you have both a credible threat of force, combined with a rigorous diplomatic effort, you can strike a deal.”