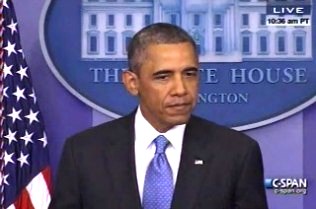 On Friday, President Barack Obama broke his silence on the verdict in the trail of George Zimmerman for the murder of Tryavon Martin. From the outset, the speech centered on a 30,000 foot vision of race relations in the United States. Initially, it struck me as a problematic speech which would foster the impression among some in the black community that the jury’s verdict was inherently illegitimate because the justice system hinges too centrally on matters relating to race. As 17-minute speech evolved, however, the purpose that Obama was attempting to achieve came into sharper focus. By its conclusion, it became apparent that this speech was challenging, nuanced, and inclusive.

“There are very few African-American men in this country who haven’t had the experience of being followed when they were shopping in a department store,” the president said. “That includes me.”

The president hit many high notes in this portion of his address – personalizing discrimination and racial tensions, and demonstrating for young black men who may be concerned about what their futures hold in the wake of a verdict they do not respect that they too can overcome adversity.

That is not to say that there was nothing problematic in Obama’s address.

“So folks understand the challenges that exist for African-American boys, but they get frustrated if they feel there is no context for it,” Obama said. “And that all contributes, I think, to a sense that if a white male teen was involved in the same kind of scenario that, from top to bottom, both the outcome and the aftermath might have been different.”

This sentiment will do nothing to disabuse many in the black community of the impression that the verdict reached by a jury in the Zimmerman case was illegitimate. In fact, it is possible that this portion of Obama’s speech may further alienate some and provide them with rhetorical ammunition to charge that racial discrimination played an undeniable role in influencing the jury’s decision.

But this minor low note was drowned out by a far grander symphony of well-crafted rhetoric.

Obama asked people to challenge their own biases. He renounced “national conversations” on race, because when they are conducted by politicians they are fundamentally unhelpful. And finally, and most importantly, he did what the media has failed to do – inform the public that, by every metric, race relations in America are getting better.

It was a sober speech, absent rhetorical flourishes and linguistic grandeur. It was a workmanlike address – the tone equal to the years of labor ahead.

In the days that followed the verdict, I thought Obama took the prudent course by not addressing the Zimmerman case. Presidents have a tendency to polarize and harden views when addressing controversial topics. The tenderness of race relations in this country, jarred by the verdict, would be better off if left to heal on its own. Today, the president proved this view unfounded. He did more good than harm with this address. History will look on it fondly.