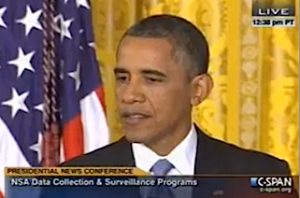 Answering a question from the Wall Street Journal’s Carol Lee about his “evolution” on surveillance issues and “restoring the public trust,” President Obama found himself reminiscing about when he used to do the dishes “back in the day.” It was one strange, yet lighthearted moment in an otherwise serious press conference.

Obama insisted that the NSA programs “are operating in a way that prevents abuse” even without the new reforms he’s proposing. “The question is,” Obama said, “how do I make the American people more comfortable?” He then went off on his dishes analogy:

“If I tell Michelle that I did the dishes–now, granted, in the White House I don’t do the dishes that much, but back in the day–and she’s a little skeptical. well,I’d like her to trust me, but maybe I need to bring her back and show her the dishes and not just have to take my word for it.”

Bringing his answer back to the question at hand, Obama said that if the American people “examined exactly what has taken place, how it has been used, what the safeguards were” that they would be comfortable with them.

“But it is absolutely true,” he said, “with the expansion of technology–and this is an area that is moving very quickly–with the revelations that have depleted public trust, that if there are some additional things that we can do to build that trust back up, then we should do them.”