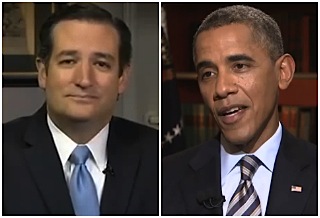 President Obama does not see any similarities between himself and Sen. Ted Cruz (R-TX). During an interview with the Associated Press released Saturday morning, Obama rejected the notion that he “set a precedent” for first term senators like Cruz, Rand Paul (R-KY) and Marco Rubio (R-FL) who have sought out the spotlight early in their political careers.

“If you recall, when I came into the Senate my attitude was, I should just keep a pretty low profile in the Senate and just do the work,” Obama told the AP, harkening back to early 2005. He admitted that the media may not have let him keep that low profile, but added, “I didn’t go around courting the media, and I certainly didn’t go around trying to shut down the government.”

“And so I recognize that in today’s media age, being controversial, taking controversial positions, rallying the most extreme parts of your base–whether it’s left or right–is a lot of times the fastest way to get attention or raise money, but it’s not good for government,” Obama continued. “It’s not good for the people we’re supposed to be serving.”

He went on to “remind” members of Congress like Cruz and others that “these are real folks that are being impacted.” He described members of his staff who may be expecting their first child or fear that if they get into a car accident, they won’t be able to pay their bills. “If they don’t get a paycheck, they may be broke,” he said.

“There is no reason government should be shutdown,” he stressed, adding that Democrats in the Senate have been willing to bring spending levels down to where Republicans want them.

“I mean, essentially what’s happened here is Democrats are saying they are prepared to pass a Republican budget for two months while negotiations continue,” Obama said. “We just can’t have a whole bunch of other extraneous stuff in it, and the obsession with the Affordable Care Act, with Obamacare, has to stop; that that is not something that should be a price for keeping the government open.”