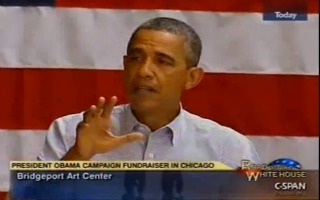 President Barack Obama, speaking at a campaign fundraiser in Chicago on Sunday, again committed what political observers would define as a gaffe – that is, when a politician accidently says what he truly believes. Obama told the audience of supporters that his is a vision of America is one where “prosperity is shared.” What this means in policy terms is up for debate, and that debate will be had. But what is beyond debate is that this is the first salvo of the new, big, vision-based election that Americans will be treated to for the remainder of the campaign.

RELATED: Obama ‘Welcomes’ Paul Ryan To Race, Deeming Him ‘Ideological Leader Of The Republicans In Congress’

“The question in this election is, which way do we go,” Obama asked of his supporters. “Do we go forward towards a new vision of an America in which prosperity is shared, or do we go backward to the same policies that got us here in the first place.”

On its face, there is nothing particularly offensive to the undefined center of American politics in this speech. In fact, the President’s warm and gracious welcoming of Rep. Paul Ryan (R-WI) to the presidential election could even burnish his image among moderates and independents (it is left to Obama’s surrogates to more actively define Paul Ryan as aggressively anti-woman, anti-elderly and anti-poor).

But what is striking and could be damaging to the President is how this statement fits into a narrative that Republicans have been cultivating about Obama over the last six months. That is, that Obama’s policy proscriptions default to redistribution of incomes.

This is narrative that was furthered considerably by Obama’s fateful address to a rally in Roanoke, Virginia in July where he suggested that small business owners “didn’t build that.” And, no, the descriptive pronoun in that sentence did not magically defy all laws of English syntax and refer to a subject stated several sentences prior, as some of Obama’s allies have since asserted.

It is the President’s idea of “shared prosperity” that has made so many Americans uneasy. After four years of governance, voters now know that his vision of “shared prosperity” is one in which the fruits of others’ labor is distributed to those who did not share in that labor. Most Americans, charitable at heart, would not oppose this mission if Obama had not so amply defined who he sees as the most deserving recipients of this sharing; including political donors, preferred constituencies and federally subsidized projects like wind and solar energy manufacturers which cannot survive on market-based demand alone.

Democrats will attempt to say that Obama’s statements are being mischaracterized and that Republicans do not give the American people enough credit for their inherent generosity. But it is Democrats who do not extend the American voter enough credit – they are able to perform a simple cost/benefit analysis. And the costs of the last three years of “shared prosperity” have far exceeded the benefits.

So, as Republican messaging shops prepare to insert this statement into the latest web ad, it is important to remember that this is fair game as it relates to the President’s world view. This is the beginning of the “big ideas” election that is promised by Ryan’s selection as Mitt Romney‘s running mate. President Obama is advocating for a “new vision” of an America that never existed. Republicans will advocate for, as Ryan aptly said on the stump on the day of his selection to become the GOP’s vice presidential nominee, a reapplication of America’s founding principles.

So, let’s bid a hearty goodbye to debates over tax returns, birth certificates and access to contraceptives. Good riddance. Today is the start of a new phase in the election — one in which we debate two visions of America. And may the best vision win.