Obama: If You’re Losing Your ‘Substandard’ Health Plan, ‘Just Shop Around on the New Marketplace’
video

Obama: If You’re Losing Your ‘Substandard’ Health Plan, ‘Just Shop Around on the New Marketplace’ 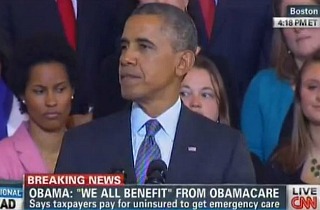 On Wednesday, President Barack Obama held a rally in Massachusetts in support of the Affordable Care Act where he addressed the crisis surrounding the millions of people who are learning they are losing their health care plans. Obama said that this was a consequence of the regulations in the ACA that make some plans more comprehensive. He advised those losing their plans to “just shop around on the new marketplace.”

“One of the things health reform was designed to do was to help not only the uninsured but also the under-insured,” the president began. He called some providers “bad apple insurers” who employed unethical practices to profit off their customers without providing adequate benefits.

“If you had one of these substandard plans before the Affordable Care Act became law, and our really liked that plan, you are able to keep it,” Obama said. “That’s what I said when I was running for office.”

RELATED: Obama Praises Mitt Romney in Boston: ‘He Did the Right Thing’ On Health Care Reform

“But ever since the law was passed, if insurers decided to cancel or downgrade these substandard plans, what we said, under the law, is you have got to replace them with quality, comprehensive coverage,” Obama said, “because, that, too, was a central premise of the Affordable Care Act from the very beginning.”

Obama said that a core set of benefits are now required under all health insurance plans including mental health, hospitalization, and maternity care.

“So, if you’re getting one of these letters, just shop around on the new marketplace,” the president continued. “That’s what it’s for.”