Obama In Wide-Ranging Interview With ABC: ‘We Don’t Have An Immediate Crisis In Terms Of Debt’
video

Obama In Wide-Ranging Interview With ABC: ‘We Don’t Have An Immediate Crisis In Terms Of Debt’ 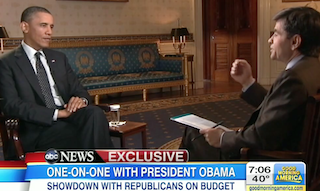 On Wednesday, Good Morning America aired more of George Stephanopoulos‘ interview with President Obama — during which they talked addressed topics ranging from a budget deal and GOP opposition to North Korea and the cancelled White House tours.

Asked about his insistence that new revenue be included in a deal, and Republican opposition to the idea, Obama said he’s not looking “to break them or to go around them” — but to find those members of Congress who are through with having the same argument over and over again. As he’s argued before, he made his case for “common sense” deficit reduction, through a combination approaches like some entitlement reform, closing loopholes.

Some Republicans will want to see significant entitlement reform, Stephanopoulos noted, asking whether raising the Medicare age is back on the table. Obama argued that many people don’t actually know what he’s proposed, but Stephanopoulos added that even those who have seen his plan say it’s not enough.

“Which is why, at some point, I think I take myself out of this,” Obama replied. “Right now, what I’m trying to do is create an atmosphere where Democrats and Republicans can go ahead, get together, and try to get something done. But ultimately, it may be that the differences are just too wide.”

“And, so, we don’t have an immediate crisis in terms of debt,” he told Stephanopoulos — a point he reiterated elsewhere in the interview. “In fact, for the next ten years, it’s gonna be in a sustainable place.”

The pair also discussed the cancelled White House tours that have elicited a great deal of criticism. Asked if they’re reconsidering, Obama replied, “Well, what I’m asking them is are there ways, for example, for us to accommodate school groups, you know, who may have traveled here with some bake sales. Can we make sure that, kids, potentially, can still come to tour?”

But he’s “amused,” he added, by those who’ve said the sequester’s effects are exaggerated and then, upon seeing the effects, “yell and scream and say, ‘Why are you doin’ that?'”

The transcript of the interview is available here.

Take a look at a portion of the interview below, via ABC (the rest will air on Nightline):