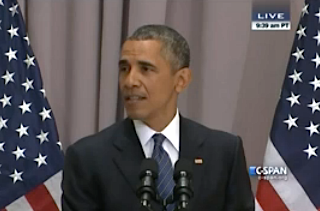 Speaking in defense of the international agreement regarding Iran’s nuclear development from American University’s Washington, D.C. campus on Wednesday afternoon, President Barack Obama addressed one of the most prominent arguments against diplomacy between the U.S. and Iran: Why should make deals with a country whose people openly chant, “Death the America”?

“I recognize the resorting to force may be tempting in the face of rhetoric and behavior that emanates from some parts of Iran,” the president said of such anti-American sentiments. “It is offensive. It is incendiary. We do take it seriously. But superpowers should not act impulsively in response to taunts. Or even provocations that can be addressed short of war.”

Unlike those “hardliners,” Obama said that the “majority of the Iranian people have powerful incentives to urge their government to move in a different, less provocative direction — incentives that are strengthened by this deal.”