Obama: It’s Not Anti-Business To Tax Hedge Fund Managers The Same As Secretaries 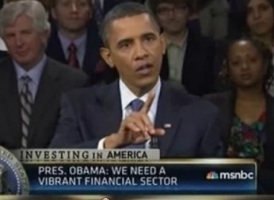 As much of the media focuses on one “exhausted” woman at President Obama‘s recent town hall meeting, others are picking apart the rest of his conversation with Americans. One moment that hasn’t been getting much press is Obama’s message to hedge fund managers: “Maybe you should be taxed more like your secretary.”

Obama’s line came after CNBC pundit Anthony Scaramucci claimed that he and “the Wall Street community” have “felt like like a piñata.” Said Scaramucci:

Maybe you don’t feel like you’re whacking us with a stick, but we certainly feel like we’ve been whacked with a stick. … When are we going to stop whacking at the Wall Street piñata?

Obama responded by confessing his amusement over any claims of him being too hard on the financial world:

I have been amused over the last couple of years of this sense of somehow me beating up on Wall Street. I think most folks on main street feel like they got beat up on. And I’ll be honest with you, there’s probably a big chunk of the country that thinks I’ve been too soft on Wall Street. That’s probably the majority, not the minority.

The President then turned his attention to the gap between what top hedge fund managers earn and what regular Americans — either on Main Street or on Wall Street — earn:

After a huge crisis, the top 25 hedge fund managers took home a billion dollars in income that year. A billion! That’s the average for the top 25. … The secretary of a hedge fund is probably being taxed at 25 [percent], 28 [percent], right? And [the hedge fund managers] are being taxed at 15 [percent]. … The notion that somehow me saying, “Maybe you should be taxed more like your secretary when you’re pulling home a billion dollars or $100 million dollars a year,” I don’t think is me being extremist or me being anti-business.

His last comments came in response to Blackstone CEO Steve Scharzaman, who claimed that the Obama Administration’s tax policies regarding private-equity firms are “like when Hitler invaded Poland in 1939.”