Obama Makes Mad Men Reference During State of the Union 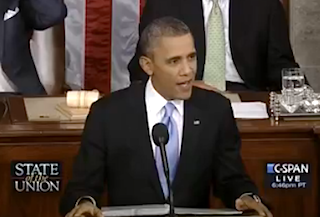 President Barack Obama’s fifth State of the Union address was not chock full of jokes, but he did get a laugh from the congressional audience when he referenced Mad Men during the section regarding equal pay for women. Obama’s assertion that “when women succeed, America succeeds,” drew a standing ovation from what looked like the entire Congress, including House Speaker John Boehner who chose not to stand for the president’s line about America’s “broken immigration system.”

Mediaite can confirm that this is the first State of the Union Address to ever reference the popular AMC series.

Here’s the section of his speech with the Mad Men reference:

Today, women make up about half our workforce. But they still make 77 cents for every dollar a man earns. That is wrong, and in 2014, it’s an embarrassment. A woman deserves equal pay for equal work. She deserves to have a baby without sacrificing her job. A mother deserves a day off to care for a sick child or sick parent without running into hardship – and you know what, a father does, too. It’s time to do away with workplace policies that belong in a “Mad Men” episode. This year, let’s all come together – Congress, the White House, and businesses from Wall Street to Main Street – to give every woman the opportunity she deserves. Because I firmly believe when women succeed, America succeeds.

You can read the full transcript here.