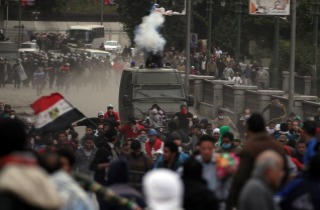 Negotiations in Geneva over the weekend aimed at slowing, if not altogether halting, Iran’s drive to create a nuclear weapon stalled when the French – the French! – insisted that the emerging framework was too lenient on Iran and could destabilize the region.

There is much to be said of the fecklessness of this White House’s Middle East policy, but few anecdotes are more instructive as to how this president has treated relations with the countries in this critical region as a nuisance and a sideshow. While much was written about how President Barack Obama’s predecessor was squandering the United States’ hard-won influence in this part of the world, it is in fact this president who, elected with a mandate to repair America’s relationship with the leaders in Mideast capitals, is weakening Washington’s position in the region.

Beyond Israel, Washington’s flirtation with a deal that would ease Iran’s path to a nuclear weapon has upended traditional power structures in the Middle East. From Riyadh to Ankara to Cairo, Mideast governments are frantically seeking an advantageous position in what increasingly appears to be an emerging post-American dynamic in this part of the globe.

Last week, Secretary of State John Kerry flew to Saudi Arabia with the task of repairing strained relationships with the kingdom. One of America’s longest standing allies in sent shockwaves through the international community in October when they rejected a seat on the United Nations Security Council. As if the message wasn’t clear enough, Prince Bandar, the former Saudi ambassador to the U.S., reportedly told diplomats that this maneuver was “a message for the U.S., not the U.N.”

Riyadh, like Tel Aviv, is increasingly wary of the increasingly apparent likelihood that the United States will not, as it has so often stated publically, use military force to prevent Tehran from developing a fissionable device.

At the same time, Russian President Vladimir Putin announced he will travel to Egypt with the aim of restoring military relations between Moscow and Cairo. The geopolitical earthquake such a restoration of ties would mean for global stability cannot be measured.

In 1972, Egypt’s Anwar Sadat, after months of cleverly pitting Cold War adversaries against one another, jettisoned Gamal Nasser’s alliance with the Soviet state. After the 1973 Yom Kippur War, Sadat welcomed a warming of relations with the United States. By 1977, with the signing of the Camp David accords, Egypt was fully and firmly rooted within in the American sphere of influence.

It is in a way poetically fitting that President Obama would undo President Jimmy Carter’s last surviving and universally applauded political achievement. In the months that followed the Egyptian coup which ousted President Mohamed Morsi, the United States finally – after much indecision and transmission of conflicting signals — announced that it would punitively sanction the governing Egyptian military.

In a statement released in early November, Kerry insisted that the reduction in aid to Egypt’s military was “not a punishment” and that the issue was “a very small issue between us.” Really? That’s not how the Egyptian military government sees it.

Egypt Daily News reporter Sophia Jones reported that some well-placed sources in Egypt see the move as a “brazen betrayal” and “the strongest proof yet that Washington is an enemy of the Egyptian state.”

“Egypt will not surrender to American pressure and is continuing its path toward democracy as set by the roadmap,” Egyptian Foreign Ministry spokesman Badr Abdel Atty said following the announcement of the cut-off of military aid.

In Iraq, where America failed to negotiate a status of forces agreement which would preserve American troop presence after the formal end of the Iraq War, the security situation is rapidly deteriorating.

In December of 2011, Iraqi Prime Minister Nuri al-Maliki claimed violence in his country had reached record lows since the 2003 invasion aimed at ousting Saddam Hussein. Since then, “many of the political and security gains that Mr. Obama acclaimed have been reversed,” the New York Times reported.

In late October, Maliki traveled to Washington to urgently request aid – helicopter gunships, counterterror support, reconnaissance drones, and the like – to prevent the country descending into the vividly remembered chaos of the insurgency. It is unlikely he will get what he has asked for. Maliki urgently left Washington to return to Iraq after his meeting with American lawmakers, indicating that negotiations did not go as he had hoped.

Iraq’s decline is welcome news to those Middle Easter countries eager to exert their influences over the fracturing Mesopotamian country. Turkey, which has been frustrated by Obama’s aborted push to intervene in the horrific violence in neighboring Syria, is actively entertaining, if not embracing, Kurdistan’s desire for independence; an eventuality that was once unthinkable in Ankara.

Turkey’s shift away from Europe and NATO, begun in the last decade, has accelerated over the past five years. Militarily and economically, an Eastward-looking Turkey is now flexing its muscles in the region independently of the wishes of its allies in Washington.

Iran, too, emboldened by its successes on the international stage, hopes to carve out its own dominion in the Iraqi Southeast.

All of this indicates that, with historically atypical alacrity, the Middle East is plunging toward multipolarity with competing spheres of influence developing around Turkish, Saudi, Egyptian and Iranian poles. With these comes a rise in tensions, surging instability, and the increasing chance that each actor may miscalculate and bring about armed conflict with the other.

It was America’s unparalleled dominance that held the frayed stitching which kept this region at relative peace over the past 40 years together. Insurrections, not great power conflicts, characterized this region over the last generation. Today, however, that dynamic is rapidly changing for the worse as Washington seeks to retrench and extricate itself from the burdens of maintaining the peace.

If this trajectory continues, it will have been Obama, not George W. Bush, who lost the Middle East. Once the fragile forces that kept this region from exploding are finally dissolved, there is no telling how – or if – the can be mended.