Obama on Baltimore: ‘No Dispute’ Men of Color Disproportionately Targeted by Police

Obama on Baltimore: ‘No Dispute’ Men of Color Disproportionately Targeted by Police 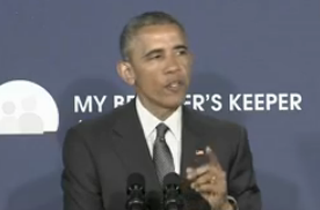 Today, Barack Obama re-launched his My Brother’s Keeper initiative as a non-profit foundation, which addresses the opportunity gap for young men of color, and he was acutely aware that the timing could not have been better.

In a speech, Obama said he planned on focusing on the initiative, “long after” he departs as president, and argued that the lack of opportunity for young men — particularly ones without fathers, such as himself — was a root cause of the mass protests throughout the country.

“You all know the numbers,” he said. “By almost every measure, the life chances of the average young man of color is worse than his peers. Those opportunity gaps begin early, often at birth, and then compound over time, becoming harder and harder to bridge, making too many young men and women feel like no matter how hard they try, they may never achieve their dreams.”

He then tied that observation — and his initiative — directly into the events of the past year involving black men being killed by police officers:

And that sense of unfairness and of powerlessness, of people not hearing their voices, that’s helped fuel some of the protests we’ve seen in places like Baltimore and Ferguson and right here in New York. The catalyst of those protests were the tragic deaths of young men and a feeling that law is not always applied evenly in this country. In too many places in this country, black boys and black men, Latino boys, Latino men — they experience being treated differently by law enforcement. In stops and in arrests and in charges and in incarcerations. The statistics are clear up and down the criminal justice system. There’s no dispute.