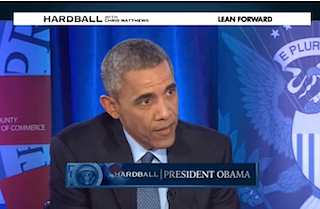 Tuesday afternoon, MSNBC’s Chris Matthews led a roundtable discussion with President Barack Obama that primarily concerned his administration’s Trans-Pacific Partnership trade deal. In doing so, the Hardball host gave the president a platform to fire back against criticism the plan has been getting from opponents like Sen. Elizabeth Warren (D-MA).

Before launching into his conversation with Obama, Matthews played a clip of a recent speech Warren made on the issue. “No more secret trade deals,” Warren said last week. “No more special deals for multi-national corporations.” She asked supporters, “Are you ready to fight any more deals that say we’re going to help the rich get richer and leave everyone else behind? Are you ready to fight that?”

“I love Elizabeth. We’re allies on a whole host of issues,” Obama told Matthews at the top of their interview. “But she’s wrong on this.”

The president described the deal as just one more in a series of efforts to pull the economy “out of the worst recession since the great depression.” He said, “Everything I do has been focused on how do we make sure the middle class is getting a fair deal. Now I would not be doing this trade deal if I did not think it was good for the middle class. And when you hear folks make a lot of suggestions about how bad this trade deal is, when you dig into the facts they are wrong.”

“If we want to compete and create jobs here in the United States we’ve got to be there, and the fastest growing, most populace region in the world is in the Asia-Pacific region,” Obama added. “So, we’ve pulled together 11 countries to come up with a high standard, an enforceable trade provision that has unprecedented labor standards, unprecedented environmental standards, fixes a lot of the problems that you had in things like NAFTA and ultimately I would not be putting this forward if I was not absolutely certain that this was going to be good for American workers.”

Falling on Warren’s side of the fence is Senate Minority Leader Harry Reid (D-NV), who told reporters Tuesday, “I have never, ever… supported a trade agreement, and I’m not going to start now. So the answer is not only no, but hell no.”