Obama On Iran: ‘If Some Of These Folks Think It’s Time To Launch A War, They Should Say So’
video

Obama On Iran: ‘If Some Of These Folks Think It’s Time To Launch A War, They Should Say So’ 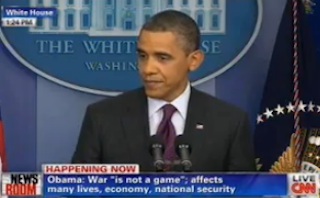 During President Obama’s press conference on Tuesday, NBC’s Mike Viqueira asked Obama about the volatile situation in the Middle East. “A little less than a year ago Moammar Gaddafi gave a speech and he said he would send his forces to Bengazi…he was going to rout people from their bedrooms and he was going shoot them. You’ve frequently cited that speech as justification for NATO, the No-Fly Zone, military action in Libya. In Syria, Bashar al-Assad is killing people, there is a massacre underway. And your critics here, including most notably John McCain says you should start air strikes now. And on Iran, Mitt Romney on Sunday went so far as to say that if you are reelected Iran will get a bomb and the world will change. How do you respond to those criticisms?” Obama responded by saying the United States was going to continue with sanctions, and, in repeating much of his AIPAC speech, said, “my policy is not containment, my policy is to prevent them from getting a nuclear weapon.”

RELATED: President Obama To AIPAC On Iran Nuke Threat: ‘I Will Not Hesitate To Use Force’

After detailing his strategy in terms of dealing with Iran, Obama responded sharply to criticisms from his opponents.

“…What is said on the campaign trail, you know, those folks don’t have a lot of responsibilities,” Obama observed. “They are not commander-in-chief and when I see the casualness with which some of these folks talk about war, I’m reminded of the costs involved in war. I’m reminded that the decision that i have to make, in terms of sending our young men and women into battle, and the impact that has on their lives, the impact it has on our national security, the impact it has on our economy. This is not a game, and there is nothing casual about it.”

“And, you know, when I see some of these folks who have a lot of bluster and a lot of big talk — but when you actually ask them specifically what they would do, it turns out they repeat the things that we’ve been doing over the last three years. It indicates to me that that is more about politics than actually trying to solve a difficult problem. Now, the one thing that we have not done is we haven’t launched a war. If some of these folks think that it’s time to launch a war they should say so, and they should explain to the American people exactly why they would do that and what the consequences would be. Everything else is just talk.”