Obama: ‘Our Muslim Population Feels Themselves to Be Americans’
video

Obama: ‘Our Muslim Population Feels Themselves to Be Americans’ 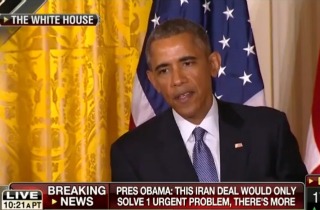 During the Q&A portion of a joint press briefing with British Prime Minister David Cameron, President Barack Obama suggested that when it comes to fighting radical Islam, the United States has a security advantage over Europe because our Muslim population feels more assimilated than in other countries.

While that point will surely be lambasted by anti-immigration portions of the right, it is a great gesture to the many moderate Muslims currently living in the United States. And his point is backed up by facts:

The United States has one big advantage to this whole process. It is not that our law enforcement or our intelligence services, etc., are so much better. […] It’s that our Muslim populations, they feel themselves to be Americans. There is this incredible process of immigration and assimilation that is part of our tradition. That is probably our greatest strength. That does not mean we are not subject to the kinds of kind of tragedy that we saw at the Boston Marathon.

As I’ve written in this space before, contrary to breathless proclamations from demagogic types, “the story of the Muslim-American is actually a success story.”

While the norm for much of Europe is the growth of Muslim-specific ghettos, active separatist movements, and violent riots, Radley Balko summed up the Muslim-American success story as such:

In contrast to many of the minority Muslim populations in Europe, American Muslims embrace modernity, are better educated, and earn more money than their non-Muslim fellow citizens. A 2007 Pew poll suggests American Muslims are also doing just fine when it comes to assimilating and viewing themselves as part of America. According to the poll, just 5 percent of American Muslims express any level of support for Al Qaeda, and strong majorities condemn suicide attacks for any reason (80+ percent), and have a generally positive image of America and its promise for Muslims.

We may have pockets of radicalization, enclaves of people who are slower to adapt to English language, etc., but it’s important to remember that our immigration story has been an incredibly successful one. Assimilation takes time, and we seem to do it better than the rest of the Western world.