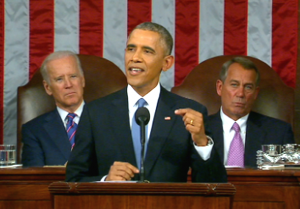 Last night’s State of the Union speech was dubbed “Turning the Page.” A fitting and appropriate theme considering the vastly-changed landscape in Washington these days.

Six years ago upon taking the office, the president’s party controlled the Senate and House…a clean 3-for-3 legislative sweep. But after one general election and two wave elections in the midterms, that control now only obviously rests with the White House. President Obama knows a solid majority of Americans want Democrats and Republicans to work together. He also knows he needs to lead by example in these situations the way the last two-term Democrat, Bill Clinton, did in his second term with Newt Gingrich and the Republican-controlled House that also took over in the second year of his presidency.

On cue, at least at first, Mr. Obama used the big stage that the State of the Union provides (at least 14 different national broadcast networks and live streaming on most major online publications) to issue an uplifting call for “a better politics”, adding that his agenda “wasn’t political” for his final two years in office while noting, “I have no more campaigns to run.” (despite stating minutes earlier that, “…in the months ahead, I’ll crisscross the country making a case for those (agenda) ideas.” But that’s not campaigning or anything.

No matter…the president wanted to let the nation know–despite veto threats of anything that didn’t resemble one of his proposals–that he truly knows what bipartisanship means and has what it takes–like Clinton with Gingrich and even Ronald Reagan with Tip O’Neill before him–to bring a broken Washington together.

But then–not so surprisingly given the way this president has conducted himself time and again over the past six years–he blew up that entire notion of goodwill and civility by delivering the line the media–who mostly loves the kind of sophomore year infighting normally reserved for Jersey Shore or Real Housewives–positively ate up and is gleefully playing over and over this morning:

“I have no more campaigns to run,” the president said, pausing for GOP applause before adding, “I know because I won both of them.”

– NBCNews.com is calling it “Obama’s ‘Drop the Mic’ Moment”

For giggles, just imagine if George W. Bush uttered a line like that in 2006. Do you think “Perfect”, “Remarkable” or “Epic” would have been applied to any headline?

Of course, the irony of the speech being titled “Turning the Page” is seemingly lost on everyone. This address was supposed to acknowledge that Washington was a different world now. Harry Reid is no longer the Senate Majority Leader. Nancy Pelosi hasn’t been Speaker of the House for four years. Proposals will reach the president’s desk with the bottlenecks now voted out. Consequently, turning the page means looking forward, not spiking the football on a victory that happened 26 months ago, and especially after the thumping the president’s party took in a second-straight midterm election. If the president wants to add up wins and losses, he would be wise to take note while turning the page that his party has lost 11 seats in the Senate (and control of it in the process) while losing another 69 in the House (and control of it in the process). Win some, lose some. Former two-term presidents all did during their respective eight years in office: Reagan did, Clinton did, George W. Bush did. All didn’t bother to taunt their opponents like Pee Wee Herman (“I know you are but what am I?”) during a speech that was actually billed around finding ways to work together in looking to the future. But given the veto threats around just about any major proposal emerging from the GOP, the next two years will be very much like the first six…except the president will be forced to explain why he’s now the personification of the Party of No.

NBC’s Richard Engel–a tremendous international correspondent and an objective one at that–is exactly correct when he noted, at least when it came to foreign policy and terror after the president failed to mention Al Qaeda even once, “It sounded like the president was outlining a world that he wishes we were all living in but is very different from the world that you just described.”

That’s the entire 2015 State of the Union in a nutshell. A tone-deaf, perpetually campaigning, compromise-challenged president who still parties like its 2008…

…Instead of taking his own advice by finally turning the page.