Obama Rejects GOP Criticism Of Boston Investigation: Sen. Graham Is Wrong, But He ‘Generated Some Headlines’ 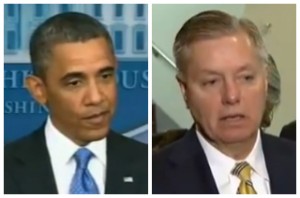 The first two questions of the press conference marking President Obama’s first 100 days of his second term Tuesday concerned the administration’s “red line” on Syria and the investigation into the Boston Marathon bombings. But somehow, both questions also hinged on Benghazi. After responding to Fox News’ Ed Henry‘s inquiry about victims of the Benghazi attack who say they are being blocked from testifying about what they went through, the president answered CNN’s Jessica Yellin on claims from Sen. Lindsey Graham (R-SC) that “Benghazi and Boston are both examples of the U.S. going backwards on national security.”

Yellin was referring to comments Sen. Graham made recently to CNN in which he affixed blame on the Obama administration for failing to prevent the attacks in Boston. During the press conference today, Yellin asked, “Is he right and did our intelligence miss something?”

“No, Mr. Graham is not right on this issue,” Obama responded, “although I’m sure it generated some headlines.” The president went on to praise the local, state and federal officials for the “exemplary” work they did in the after the attack but also defended the FBI’s investigation into the older Tsarnaev brother in the years prior. “It’s not as if the FBI did nothing,” he said. “They not only investigated the older brother, they interviewed the older brother. They concluded that there were no signs that he was engaging in extremist activity.”

Now, he added, it’s the FBI’s job to go back and investigate what could have triggered his “radicalization.” The president said, “because of pressure that we have put on Al Qaeda and the pressure we put on these networks that are well financed and more sophisticated… one of the dangers we now face is self-radicalized individuals who are already in the U.S. and in some cases may not be part of any kind of network.” He said those threats can be even more difficult to prevent, but that he has directed additional counter-terrorism resources towards those areas.

On the question of whether Americans should be “worried” when they go to large public events, President Obama pointed to the people of Boston as an example. “You don’t get the sense that any is intimidated when they go to Fenway Park a couple of days after the bombing.” Drawing a parallel between the Boston attack and recent mass shootings, the president said, “People also understand, in the same way they understand after a shooting in Aurora, Newton, Virginia Tech, or after the foiled attempts in Times Square or in Detroit, that we’re not going to stop living our lives because warped, twisted individuals tried to intimidate us.”

Watch video below, via C-SPAN

“With all due respect Mr. President, Benghazi and Boston are compelling examples of how our national security systems have deteriorated on your watch.

In Benghazi, multiple requests for increased security were denied and numerous warnings from Ambassador Stevens about the growing threats from al Qaeda were ignored by Washington. For over seven and a half hours during the attack our Americans in the field were abandoned. After the attack, your Administration provided misleading information to the American people.

In Boston, both the FBI and CIA were warned by the Russians about a radical Islamist in our midsts. Once enrolled in the system as a potential terror suspect, the older brother was able to travel back to Russia unimpeded by DHS or any of our intelligence agencies. Agencies under your control were unable to coordinate the information they received on the Boston terrorists.