Obama Releases Agenda, Miscalculates That The Press Would Tout It While He Campaigns On ‘Romnesia’
video

Obama Releases Agenda, Miscalculates That The Press Would Tout It While He Campaigns On ‘Romnesia’ 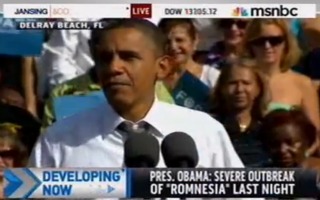 On Tuesday morning, after much prodding from supporters and opponents alike, President Barack Obama’s reelection team released a booklet containing specific policy items that the president will pursue in his second term. After that release, however, the president took to the stump in Florida where he delivered a speech focusing on his opponent’s “Romnesia.” If the president is leaving the touting of his second term agenda up to the press, he may find the media is no longer willing to act in concert with the Obama campaign.

RELATED: The Media Has Stopped Filling In The Blanks For The Obama Campaign

The 20-page booklet containing the outlines of President Obama’s second term agenda was released to the media on Tuesday morning to the surprise of the press corps. Obama’s “Plan for Jobs & Middle-Class Security” consists primarily of touting his first term’s accomplishments, but it also proposes action items like cutting tax rates on domestic manufacturers and expanding oil and gas production on federal lands.

They augmented the release of the plan with a 60-second ad which will serve as the president’s closing argument. “There’s just no quit in America. And you’re seeing that right now,” Obama says in the ad, “Determination.” “We’re not there yet, but we’ve made real progress and the last thing we should do is turn back now.”

While these proposals are not entirely new to anyone who has followed the campaign closely, the voter who remains undecided with two weeks left in the election cycle has not followed the campaign closely. This is probably all new information to the uncommitted sort. The press was left to peruse this proposal and, in the likely estimation of the Obama campaign, tout it with some repetition in order to pacify Obama’s critics and convince undecided voters that the president has a plan.

That task behind him, Obama took to the stump in Florida where he picked up on a familiar, if embarrassing, campaign theme; his opponent, Mitt Romney, has come down with the unique condition of “Romnesia.” Adopting the call-and-response-style of comedian Jeff Foxworthy, Obama went on to lambast his opponent for his malleable positions.

“We’re breaking down the symptoms here,” Obama said before a crowd of Delray Beach supporters on Tuesday.

“If you say that you love Medicare, but your plan turns it into a voucher that ends the guaranteed benefit of Medicare – you definitely have ‘Romnesia,” Obama said.

“If you can’t seem to remember the policies on your website or the promises that you’ve been making over the six years that you’ve been running for president, if you can’t even remember what you said last week – don’t worry – Obamacare covers preexisting conditions. We can fix you up. We can cure this disease,” Obama added to cheers.

Where were the proposals in his second term agenda? Not in his opening remarks which were carried on MSNBC and CNN. Are the members of the political press still willing accomplices that will uncritically fill in the Obama campaign’s blanks with specifics? It remains to be seen if that is the case but, following Obama’s disastrous first presidential debate, the press showed a conspicuous lack of interest in finishing the president’s sentences for him or fleshing out his campaign’s attacks on his opponent.

Will the political media roll out the Obama campaign’s agenda for them? The White House seems to be banking on that eventuality, but I would not be so sure.