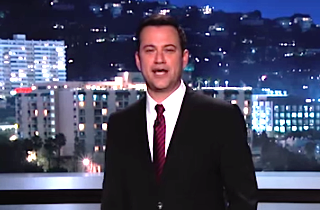 President Barack Obama has talked politics with David Letterman and slow jammed the news with Jimmy Fallon, but he has yet to appear on Jimmy Kimmel Live. TMZ claimed that was about to change this week when they reported that Obama would appear on Jimmy Kimmel’s show this Wednesday during an already-scheduled trip to Los Angeles.

The site quoted “ABC network sources” who said Obama would travel to the El Capitan theatre on Hollywood Boulevard to tape a segment with Kimmel that would be at least partly “serious.” Sources at the LAPD reportedly confirmed the news to TMZ, saying the president would be at the studio for one hour starting at 3 p.m. The president is scheduled to be in Los Angeles this week, attending a fundraiser at the home of Scandal creator Shonda Rhimes on Wednesday night.

But ABC is officially denying the report, calling the news “inaccurate” and saying Obama is “not booked on the show.” The Kimmel show issued a similar denial, telling TMZ Obama will not be appearing on the show Wednesday.

Now, Fox News has reported that the White House canceled the scheduled “surprise” appearance, likely out of concerns that the late night spot would make for poor optics with the crises in Ukraine and Gaza dominating the news cycle. Fox contributor Byron York was one of the first to break that news on Twitter:

WH tells Fox there will be no Kimmel appearance in Obama's LA visit.

Kimmel has a big show scheduled for Monday night, with the Guardians of the Galaxy cast set to “invade” the show. According to TV Guide, Wednesday has a performance from Common and no other guests listed. Looks like they are going to have to find someone else to replace the president.

Watch video of Greta Van Susteren breaking the news to her audience below, via Fox News: