Obama Roasts Himself, Jabs At Romney And Even Elbows Chris Matthews During Al Smith Dinner
video

Obama Roasts Himself, Jabs At Romney And Even Elbows Chris Matthews During Al Smith Dinner 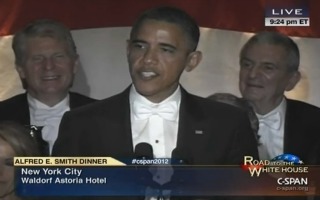 Following the conclusion of GOP presidential nominee Mitt Romney’s address to the Alfred Smith Dinner in New York City on Thursday night, President Barack Obama took to the stage to deliver his light-hearted jabs at himself and at his opponent. The president joked about the election, he took jovial swipes at his opponent and even poked fun at MSNBC host Chris Matthews.

“Everybody please take your seats, otherwise Clint Eastwood will yell at them,” Obama said to the laughs of the crowd.

“In less than three weeks, voters in states like Ohio, Virginia and Florida will decide this incredibly important election, which begs the question – what are we doing here?” Obama asked.

“Tonight, I am here with a man who was a popular governor, who knows what it’s like to run a major Northeastern state and who very well could be president someday, and I am hoping it is Andrew Cuomo,” Obama joked.

He took aim at his own debate performance in the first debate which observers called a lackluster performance. “I particularly want to apologize to Chris Matthews,” said Obama. “Four years ago, I gave him a thrill up his leg. This time around, I gave him a stroke.”

Obama noted that he went to school in New York City. The president said he used to love to go to Yankee Stadium, “the House that Ruth Built, although he really did not build that. I hope everybody is aware of that.”

Obama noted that the campaign seems like it has gone on for a long time, and that there were some milestones along the way. “The unemployment rate is the lowest since I took office. I actually don’t have a joke here, I just thought it would be good to remind everybody,” Obama said.

“Tonight’s not about the disagreements Gov. Romney and I might have, it’s about what we have in common – beginning with our unusual names,” said Obama. “Actually, Mitt is his middle name. I wish I could use my middle name.”

“Finally, let me say that I’ve been doing some thinking and I’ve decided that for our final debate I’m going to go back to the strategy I used to prepare for the first debate,” said Obama. “I’m just kidding. I’m trying to make Axelrod sweat a little bit.”

Obama closed by thanking his hosts and praised the nature of American democracy for making a moment like the Al Smith Dinner possible. He praised Mitt Romney, too, as a husband and father.

“We may have different political perspectives, but I think — in fact I’m certain – that we share the hope that the next four year will affect the same decency and the same willingness to come together for a higher purpose that are on display this evening,” Obama said in closing.