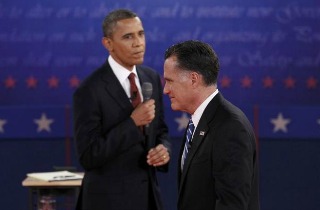 During a joint press conference in the Netherlands alongside the Dutch prime minster, President Barack Obama fielded questions from the American press corps regarding Russia’s destabilizing invasion of neighboring Ukraine. With tens of thousands of Russian troops and hundreds of machines of war poised on the Ukrainian border ready at a moment’s notice to inflame the crisis further, ABC News White House correspondent Jonathan Karl asked a series of probing and uncomfortable questions of the president regarding his approach to foreign affairs.

After making an arguable case that the president’s approach to America’s foreign adversaries was naïve and that his chief rival, former Republican presidential nominee Mitt Romney, may have been correct in his clear-eyed assessment of the threat Moscow posed to the post-Cold War global order, President Obama did the only thing he could do — answer the question he wish he was asked.

“In light of recent developments, do you think that Mitt Romney had a point when he said Russia is America’s biggest geopolitical foe?” Karl continued.

Faced with this searing indictment in the form of a question, Obama proceeded to erect and slay a straw man of his choosing: American military interventionism.

“If the premise of the question is whenever the United States objects to an action, and other countries don’t immediately do exactly what we want, that that’s been the norm, that would pretty much erase most of 20th Century history,” Obama replied.

No matter how much anyone would like to “erase most of 20th Century history,” this supposed attempt at clarification could not even be described as occupying the same universe as “the premise of the question.”

Obama then attributed to Karl what he decided was “implied” in his question, that America should take military action against an undisclosed foe, presumably the Russian Federation – a suggestion, implicit or otherwise, that no one, including Romney, has ever made.

The president spent most of the time he took responding to Karl tilting valiantly against the same windmill he has ceaselessly attacked since the 2008 presidential campaign. Indeed, Obama’s instinct to obliquely attack his predecessor when confronted with his own failures in office is telling.

Even amid an emergency summit convened to address the greatest threat to European security in a generation, the president is still campaigning. It is more than his comfort zone. It is his chief proficiency.

Turning to the question Karl posed about the clearly vindicated Romney, Obama could of course not bring himself to admit that his snide and flippant dismissals of the former governor’s prescient warnings were merely an expedient course to an applause line, even if he shirked his responsibility to warn the public of real and present threats to American national security in the process.

“Russia is a regional power that is threatening some of its immediate neighbors, not out of strength but out of weakness,” Obama asserted, as though he was talking about the psychological insecurities that plague the average playground bully.

“The fact that Russia felt compelled to go in militarily and lay bare these violations of international law indicates less influence, not more,” Obama insisted.

President Obama’s core supporters in the United States may still eat this nonsense up, but the actions of America’s geopolitical adversaries abroad suggest that they have long ago pegged the president as a pushover.

This was an embarrassing display in Holland, one that will almost certainly invite more testing of the America’s willingness to defend the post-Cold War order.

Watch below, via Fox News Channel: