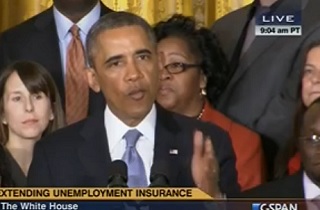 As Democrats slowly overcome Republican opposition to a measure that would extend emergency unemployment insurance benefits, President Obama took to the airwaves Tuesday morning to make the case for the measure. Speaking from the East Room of the White House, surrounded by some of the Americans who have lost their benefits, the President took a moment toward the end of the speech to take on comments that Sen. Rand Paul (R-KY) made on ABC’s This Week on Sunday.

Without naming Paul, the President described the Senator’s comments. “I have heard the argument that says extending unemployment insurance will somehow hurt the unemployed, because it saps their motivation to get a new job,” the President said, and paused for effect. To applause from the room, he added “I really want to — I want to go at this for a second.”

“The long-term unemployed are not lazy. They are not lacking in motivation. They are coping with the aftermath of the worst economic crisis in generations,” President Obama added, saying “It’s hard out there. There are a lot of friends, a lot of our neighbors who have lost their jobs, and they are working their tails off every single day trying to find a new job.”

Here’s that portion of the speech, from C-Span:

And here is video of the full speech, via C-Span: