Obama: Snowden Not A ‘Patriot,’ There Were ‘Other Avenues’ He Could’ve Taken To Voice Concerns 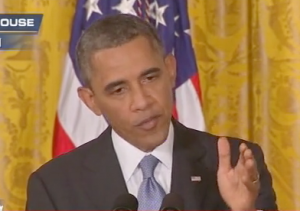 NBC’s Chuck Todd asked President Obama at his big press conference today about his views of NSA whistleblower Edward Snowden; specifically, whether the president actually now considers him more a whistleblower than a criminal, even going so far as to ask the president if Snowden might be a “patriot.” Obama repeatedly insisted that Snowden could have easy made his concerns known in another, less explosive manner that would not have triggered such a “rapid and passionate response” across the country.

Obama said, “My preference, and I think the American people’s preference, would have been for a lawful, orderly examination of these laws, a thoughtful fact-based debate that would then lead us to a better place.”

He suggested that if Snowden really believes he did the right thing, “then, like every American citizen, he can come here, appear before a court with a lawyer, and make his case.” The president completely dismissed the idea that “this was the only way to get information out to the public,” touting an executive order he signed protecting intelligence community whistleblowers that provided “other avenues available for somebody whose conscience was stirred.”

Obama did acknowledge that it was a “false assumption” to think that oversight from the FISA court and Congress “would be enough” to assure the American people, but he still maintained Snowden’s leaks were the wrong way to kick off the surveillance debate.

“There’s no doubt that Mr. Snowden’s leaks triggered a much more rapid and passionate response than what would have been the case if I had simply appointed this review board to go through–and I’d sat down with Congress and we’d worked this thing through. It would have been less exciting, it would not have generated as much press. I actually think we would have gotten to the same place, and we would have done so without putting at risk our national security.”

The review board Obama mentions is the Privacy and Civil Liberties Oversight Board, which he met with for the first time two months ago, after weeks of revelations based on Snowden’s leaks.