Obama Speaks on ISIS: ‘If You Threaten America, You Will Find No Safe Haven’ 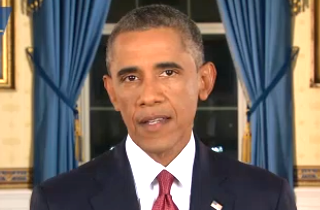 President Obama delivered a big, primetime speech tonight on the threat ISIS poses to the United States. Obama made it clear that he is taking swift action with a coalition of nations to combat ISIS. He said that ISIS poses the most direct threat to Iraq, Syria, and the broader Middle East, but “if left unchecked, these terrorists could pose a growing threat beyond that region, including to the United States.”

ISIS has been growing steadily in the public consciousness for months now, especially with the shocking videos of two American journalists beheaded by the terrorist group. The president addressed these brutal beheadings, and assured that the United States is doing everything in its power to “meet them with strength and resolve.” Obama vowed that “we will hunt down terrorists who threaten our country wherever they are” and “if you threaten America, you will find no safe haven.”

He laid out a four-part comprehensive strategy to combat ISIS: first, to continue airstrikes against ISIS targets; secondly, to send more American service members into Iraq to help Iraqis combat the threat posed against their people (though Obama emphasized the troops aren’t there on combat missions), as well as providing military assistance to the Syrian opposition: thirdly, to “prevent ISIL attacks” in the first place by cutting it off at the knees; and fourth, to continue sending humanitarian assistance to civilians “displaced” by ISIS.

The president concluded by touting America’s leadership “in an uncertain world.” He said, “As Americans, we welcome our responsibility to lead. From Europe to Asia––from the far reaches of Africa to war-torn capitals of the Middle East––we stand for freedom, for justice, for dignity. These are values that have guided our nation since its founding. Tonight, I ask for your support in carrying that leadership forward.”