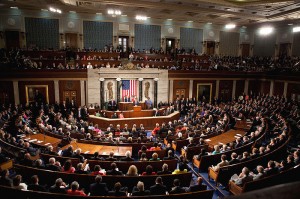 Earlier today, the White House announced that President Obama is calling for a joint session of the U.S. Congress to deliver his plans to address a stagnant economy and high jobless rate. Given the heightened and bipartisan calls for the administration’s plan to address these issues, this would be big news on its own, but the fact that the White House set the date for the speech on the same evening as a planned GOP Presidential debate has added an intriguingly nuanced level of political gamesmanship that’s been noticeably absent of late from the Obama administration.

Regardless of what you think about President Obama‘s policies and/or politics, there has been a fairly consistent refrain on both sides of the political opiniotainment abyss regarding the White House’s reaction to a stagnant economy and high unemployment rate. It is within this context to best appreciate the rather daring gambit of announcing a joint session congressional address on the same night as the GOP debate.

The pundits on the right have predictably been hitting the president hard on what the see as both failed policy and a so-called lack of plans to fix an ailing economy (though to be fair, some notable conservative pundits have also pointed out that the problems are more endemic to the current political and financial system). Nonetheless, the takeaway from the right is that the stakes are dire, and the President has to get engaged. Conversely, progressive pundits have hit the other side of the same coin, asking why the president is taking political attacks lying down, or failing to present a more consistently progressive agenda, or criticizing his efforts to legislate from the center (and ultimately cede far too much compromise to what is deemed the more obstinate and extreme right).

Making his speech during a joint session is a bold move on its own, and sets up the visual that the President worked so hard (and sacrificed so much with his base) to achieve: he aspires to be literally viewed as the only adult in the room, ostensibly dressing down a Congress that many feel has failed to act responsibly to grow the economy. With any luck, as Tommy Christopher points out, one or two of the “kids” will act up, and draw that image into even starker relief. As political theater to the independent voters he covets, this is the President’s Carnegie Hall.

By announcing plans to address the “dire” and “urgent” state of a stagnant economy on the same night of the GOP debate, President Obama draws two very important distinctions. First, he is asking the national television viewing audience to make a choice between policy and politics; a speech in which the “leader of the free world” will almost certainly (predictably?) be asking for bipartisan support will provide a stark contrast against a GOP debate that will repeatedly be hitting the Obama administrations efforts. That is a comparison that the White House campaign staff are surely relishing.

Secondly, a request to address a joint session perfectly leverages the urgent and alarming rhetoric of all of GOP presidential candidates, which has been effectively (and predictably) amplified by right-of-center opinion media networks and right-wing radio talk show hosts. It is a perfect example of political jujitsu: Obama is using the force of desperation from the right to effectively mute any possible critique of his address. How can any Republican official effectively criticize a president who is simply responding to calls to address the political problems that the country is currently facing?

Finally, the fact that the GOP debate is being broadcast by NBC (and not Fox News) is an additional detail that is also worth noting. No one can reasonably suggest that the White House is in some way trying to “get back” at NBC News or MSNBC with the schedule conflict, and the political commentators on the primetime slate at Fox News will have a hard time encouraging viewers to watch GOP debate on their cable news competitor.

Regardless of one’s political persuasion, its difficult not to appreciate the rather bold maneuver of putting his own policies on the same platform of his opponents politics.