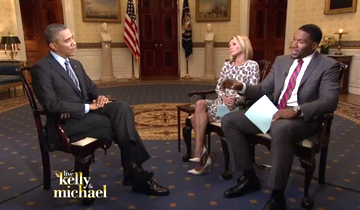 The last place anyone really wants to get a serious political question is on Live with Kelly and Michael, and part of us thinks that Barack Obama went on the morning talk show yesterday to do a pre-taped interview, hoping probably for some fluffy emergency PR — hold a baby tiger, talk about his marriage, spin a wheel, etc.

But Michael Strahan, a former NFL player whose father also happens to be a retired major, decided to throw in a surprise question about the VA hospital scandal: “There’s been calls for the resignations, and [VA Secretary Eric] Shinseki says he’s not going to resign. Do you think that he should, and if he doesn’t, would you be inclined to remove him?”

And then Obama got Eric Shinseki to resign this morning, so we guess it worked. So by extension, Michael Strahan helped solve America. Whoda thunk?!