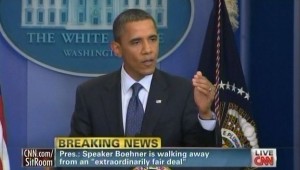 President Obama took to the White House briefing room podium Friday afternoon to take questions regarding the earlier collapse of the debt crisis negotiations between the administration and the GOP. A rather pedestrian press briefing suddenly turned spirited with last question posed by Huffington Post’s Sam Stein, who asked about market reaction on Monday. Mr. Obama seemed passionate, if not…well, pissed, with Speaker Boehner and other GOP leadership for the stalled talks.

Perhaps most conspicuous in Obama’s response what that Stein’s question provided an opportunity for the president to calm the markets. And while he opened with his confidence that an extension of the debt limit would avoid default, its not exactly like went out of his way to appease potentially skittish investors on Wall Street.

A rough transcript of his comments follows the video embedded below, courtesy of CNN:

I remain confident that we will get an extension of the debt limit and not default. I am confident of that. I am less confident at this point that people are willing to step up to the plate and actually deal with the underlying problem of debt and deficits. That requires tough choices. That’s what we were sent here to do. I mean the debt ceiling… that’s a formality, historically its not even been an issue. Its an unpleasant vote, but its been a routine vote that congress does periodically.

It was raise 18 times when Ronald Reagan was president. Ronald Reagan said ‘default is not an option,’ that it would be hugely damaging to the prestige of the United States and we shouldn’t even consider it. So that’s the easy part – we should have done that six months ago.

The hard part is actually dealing with the underlying debt and deficits. And doing it in a way that’s fair. That’s all the American people are looking for, some fairness. I can’t tell you how many letters and emails I get, including from some Republican voters who say we know that neither party is blameless when it comes to how this debt and deficit developed.

There’s been a lot of blame to spread around, but we sure hope you don’t just balance the budget on the backs of seniors. We sure hope that we aren’t slashing our commitment to make sure that kids can go to college. We sure hope that you aren’t throwing a bunch of poor kids off the medicaid rolls so that can’t get basic preventative services that keep them out of the emergency room. That’s all they are looking for is some fairness.

Now what you are going to hear, I suspect, is well if the senate is prepared to pass the cap cut and balance — the Republican plan — that somehow we could solve this problem that’s serious debt reduction. Turns out that the plan that Speaker Boehner and were talking about was comparable in terms of deficit reduction.

The difference was that we didn’t put all the burden on the people who were least able to protect themselves, who don’t have lobbyists in this town, who don’t lawyers working on the tax code for them. Working stiffs out there, ordinary folks who are struggling everyday. And they know they are getting a raw deal and they are mad at everybody about it. They are mad at Democrats and they are mad at Republicans because they know that somehow no matter how hard they work they don’t be able to seem to keep up. And what they are looking for is somebody who is willing to look out for them. That’s all they are looking for.

And for us to not be keeping those in mind every single day when we are up here. For us to be more worried about what some funder says or what some talk radio show host or what some columnist said, or what pledge back when we were trying to run or worried about having a primary fight…for us to be thinking in those terms? Instead of thinking about those folks is inexcusable!

I mean the American people are just desperate for folks who are willing to put aside politics for just a minute and try and get some stuff done. So when Norah asked, or when somebody else asked “why was i willing to go a long with a deal that wasn’t optimal from my perspective?” Because even if I didn’t think the deal was perfect, at least it would show tat this place was serious. That we are willing to take on these responsibilities even when its tough. That we’re willing to step up even when the folks who got us elected may disagree.

And at some point, if you want to be a leader, you gotta lead.