Obama Takes Responsibility for Midterms: ‘I’ve Got to Make This City Work Better’ 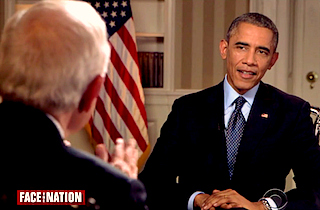 On Face the Nation Sunday morning, President Barack Obama accepted responsibility for his party’s woeful midterm performance last week, but also defended his administration’s economic performance and said he needed to a do a better job selling what he maintained were good policies.

“Whenever, as head of the party, it doesn’t do well, I’ve got to take responsibility for it,” Obama said. “The message that I took from this election, and we’ve seen this in a number of elections, is people want to see this city work….[People] see Washington gridlocked and they’re frustrated, and they know one person in Washington and that’s the President of the United States. So I’ve got to make this city work better for them.”

Obama denied that his rumored hatred of political dealing was hampering his presidency. “We wouldn’t have gotten health care passed if there wasn’t a whole bunch of arm twisting. We would not have been able to make progress on the deficit if I hadn’t been willing to cut some deals with Republicans.”

But he did admit that he needed to do a better job selling the GOP on his policies. “When you start governing, there is a tendency sometimes for me to start thinking, as long as I get the policy right that’s what should matter,” Obama said. “One thing I do need to constantly remind myself and my team are, is it’s not enough just to build a better mousetrap. People don’t automatically come beating to your door. We got to sell it. …I think there are times when we have not been successful at going out there and letting people know what it is we’re trying to do and why it’s the right direction. So there is a failure of politics there.”