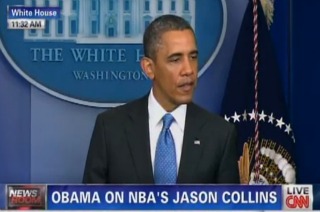 After delivering lengthy answers to questions about Benghazi, Syria, the Affordable Care Act and immigration reform, President Barack Obama prepared to leave the White House Briefing Room. On his way out the door, however, he heard a reporter ask him a question about Jason Collins, the NBA player who came out yesterday as gay and received a call from the president in congratulations. Obama stopped, wheeled around, and headed back to the podium to address Collins’ courage.

RELATED: ‘Can’t Just Put People In A Box’: Gay NBA Player Opens Up To George Stephanopoulos About Coming Out

“I had a chance to talk to him yesterday,” Obama said of Collins. “I told him I couldn’t be prouder of him.”

Given the importance of sports in our society, for an individual who’s excelled at the highest levels in one of the major sports to go ahead and say ‘this is who I am. I’m proud of it. I’m still a great competitor. I’m still seven foot tall and can bang with Shaq and, you know, deliver a hard foul.

Obama said that Collins is a role model for gay and lesbian youth and America should be proud of Collins. “We judge people based on their character and their performance and not their sexual orientation,” Obama said. “I’m very proud of him.”