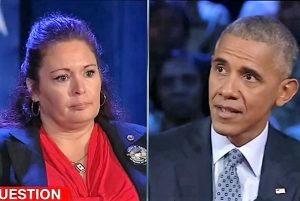 During a town hall event hosted by CNN’s Jake Tapper Wednesday night, President Obama was not afraid to call it as he sees it to a Gold Star mom who questioned him over his resistance to the term “radical Islamic Terrorism,” and to whom he replied that “this is an issue that has been sort of manufactured” by opponents who are ignoring many of his past statements in order to make a cheap point.

The question came from Tina Houchins, whose then-19 year-old son Aaron Gautier was killed in Iraq in 2007, and who sort of answered her own question with a slip of nerves as she asked it. IT was obviously not her intention, but she asked the President why he refused to “use the term racially — I’m sorry, Islamic terrorist?”

The President explained, as he has in the past, that while groups like ISIS claim religious justification, he does not want to even unintentionally give the impression that the United States views all Muslims as threats, or the religion of Islam as the enemy:

TINA HOUCHINS: Hi, Mr. President. As a gold star mother, my son gave his life for acts of terrorism. Do you still believe that the acts of terrorism are done for the self-proclaimed Islamic religious motive? And if you do, why do you still refuse to use the term racially — I’m sorry, Islamic terrorist?

OBAMA: Well, first of all, I want to thank your son, obviously, for his service. I spent a lot of time with gold star moms, as does Michelle, and it’s always one of the most profound things we do in office, is just spending time with families and hearing about not just the sacrifices, but also the incredible life and patriotism and talent that these men and women live their lives with.

The truth of the matter is that this is an issue that has been sort of manufactured, because there is no doubt, and I’ve said repeatedly that where we see terrorist organizations like al-Qaeda or ISIL, they have perverted and distorted and tried to claim the mantle of Islam for an excuse, for basically barbarism and death. These are people who kill children, kill Muslims, take sex slaves — there’s no religious rationale that would justify in any way any of the things that they do.

But what I have been careful about when I describe these issues is to make sure that we do not lump these murderers into the billion Muslims that exist around the world, including in this country, who are peaceful, who are responsible, who in this country, are our fellow troops and police officers and firefighters and teachers and neighbors and friends.

And what I learned from listening to some of these Muslim families both in the United States and overseas is that when you start calling these organizations Islamic terrorists, the way it’s heard, the way it’s received by our friends and allies around the world is that somehow Islam is terroristic. And that then makes them feel as if they’re under attack. In some cases, it makes it harder for us to get their cooperation in fighting terrorism. So do I think that if somebody uses the phrase Islamic terrorism that it’s a huge deal?

No. There’s no doubt that these folks think that — and claim that they’re speaking for Islam.

But I don’t want to validate what they do. I don’t want to — if — if you had a — an organization that was going around killing and blowing people up and said we’re on the vanguard of Christianity, well, I’m not — as a Christian, I’m not going to let them claim my religion and say you’re killing for Christ. I would — I would say that’s ridiculous. That’s not what my religion stands for. Call these folks what they are, which is killers and terrorists. And — and that’s what we’ve been trying to do, is to make sure that A, we don’t validate their claims that somehow they speak for Islam, because they don’t. And, B, making sure that we do not, uh, make Muslims who are well-meaning and our natural allies on this fight, because these groups are killing more Muslims than they’re killing anybody else, make sure that they don’t feel as if somehow the — this is some contest between the West and Islam.

And, you know, I think that — I’ll just be honest with you, the dangers where we get loose in this language, particularly when a president or people aspiring to get pres — become president get loose with this language, you can — you can see in some of the language that we use — in talking about Muslim-Americans here and the notion that somehow we’d start having religious tests in — in who can come in the country and who’s investigated and — and — and whether “The Bill of Rights” applies to them in the same way.

And that’s a slippery slope. And — and — and the way we’re going to win this battle is not by betraying our ideals, it’s by making sure that we hold true to our ideals and one of our core ideals is — is that, you know, if you’re an American and you are, you know, subscribing to the ideals and the creed and the values that we believe in as a country, you know, then we don’t have a religious test in this country.

As easily as Ms. Houchins slipped and asked about “racially” Islamic terrorists is exactly how easily a U.S. President’s terminology can be interpreted to mean something he or she doesn’t really mean, or maybe that they really do mean, as the case may be. Her intent is obviously not to offend the many thousands of Muslim soldiers who have been lost in service to our country, but there are others whose main interest actually is in rebranding Islam as an inherently suspect religion, and this is one of the ways they’d like to do it.