Obama to Chris Matthews: MSNBC Has ‘Blasted’ Me for Being ‘Too Willing’ to Compromise
VIDEO

Obama to Chris Matthews: MSNBC Has ‘Blasted’ Me for Being ‘Too Willing’ to Compromise 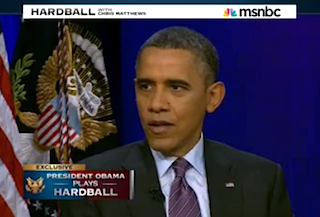 While it’s become almost routine for President Barack Obama to criticize Fox News, it is far more rare that he has something negative to say about MSNBC. The president sat down for an extended interview with the progressive network’s Chris Matthews Thursday afternoon for the first time since he was running for the office in 2008. And during a discussion about gridlock between the executive and legislative branches of the government, Obama hit MSNBC for saying he’s “too willing” to compromise with Republicans.

Matthews cited comments made by House Speaker John Boehner (R-OH) about the difficulty of getting anything accomplished with a divided government and pushed Obama to “compromise” with the speaker and then just blame him “for the parts of the deal that you don’t like.”

“First of all, I think Chris it’s fair to say I have always been prepared to not only negotiate, but to go ahead and push forward on principled compromises,” Obama replied. “In fact, sometimes on your station, MSNBC, I’ve been blasted for being too willing to compromise.”

Admitting he’s approaching the issue from a “partisan” standpoint, the president said, “Objectively I think you can look at it and say that the big challenge we’ve got is you’ve got a faction of the Republican Party that sees compromise as a dirty word and that has moved so far to right, that it would be difficult for a Ronald Reagan to win the nomination for the Republican Party at this point.”

Echoing comments he made at a Wall Street Journal event last month, Obama added, “We’re not like some countries, where you actually have a socialist party on one hand and an ultra-conservative party on the other hand. Most of the time we’re playing between the 40 yard line here.”