Obama to CNBC: ‘I Have Bent Over Backwards’ For GOP and ‘Kept My Rhetoric Down’
video

Obama to CNBC: ‘I Have Bent Over Backwards’ For GOP and ‘Kept My Rhetoric Down’ 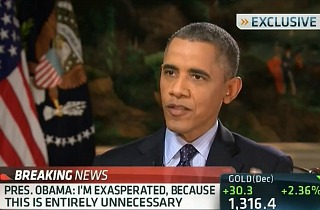 In an exclusive interview broadcast on CNBC, President Barack Obama told NBC News reporter John Harwood that he believes he is not the impediment toward creating a consensus in Congress to reopen the government. Obama said he believes that he has “bent over backwards” and kept his “rhetoric down” in order to make sure that he was not central to the debate over the government shutdown.

Harwood asked Obama about his “tone” over the course of the debate leading to a government shutdown. Harwood asked if it was Obama’s intention to create the impression that he thinks his Republican opponents are “either craven, or stupid, or nuts.”

“John, I think it’s fair to say that, during the course of my presidency, I’ve bent over backwards to work with the Republican Party,” Obama said. “And have purposely kept my rhetoric down.”

RELATED: Liberals Will Cringe, But Obama Must Offer GOP a Face-Saving Way Out of Crisis They Created

“I’m pretty well known for being a calm guy,” the president continued. “Am I exasperated? Absolutely I’m exasperated. Because this is entirely unnecessary.”

Obama said that Speaker John Boehner (R-OH) could reopen the government tomorrow by putting the bill to fund the government passed by the Senate up for a vote in the House. He said that Boehner is beholden “to a faction of the Republican Party that are willing to burn the house down because of an obsession over my health care initiative.”

“I am exasperated with the idea that, unless I say to 20 million people, ‘You can’t have health insurance,’ these folks will not reopen the government,” Obama added. “That is irresponsible.”