Obama to Congress: Time to Ignore ‘Activists,’ ‘Bloggers,’ and ‘Talking Heads on Radio’ 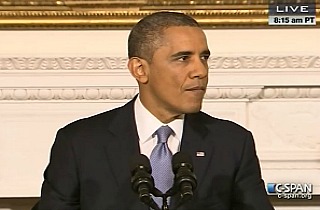 On Thursday morning, with the government reopened and the debt ceiling crisis behind the country, President Barack Obama held a news conference where he insisted that members of Congress move on from “manufactured crises.” He called on them to ignore the pundit class and focus on progress and negotiations.

The president addressed some of the discussion in the media of the political impact the shutdown would have on the standing of both parties in polls.

“Let’s be clear,” Obama said. “There are no winners here.”

“We don’t know yet the full scope of the damage, but every analyst believe it slowed our growth,” the president said of the shutdown. He said that consumer spending, new home buying, and hiring have slowed as a result of the shutdown.

“We hear some members who pushed for the shutdown say they were doing it to save the American economy,” Obama said. “But nothing has done more to undermine our economy these past three years than the kind of tactics that create these manufactured crises.”

The president said that America’s credibility with other nations has been damaged by the “spectacle” of the government shutdown.

“All my friends in Congress, understand that how business is done in this town has to change,” Obama said. “Because we’ve all got a lot of work to do on behalf of the American people, and that includes the hard work of regaining their trust.”

RELATED: Obama Responds to Anonymous Quote: ‘No One is Winning’ If Shutdown Continues

“All of us need to stop focusing on the lobbyists, and the bloggers, and the talking heads on radio, and the professional activists who profit from conflict, and focus on what the majority of Americans sent us here to do,” Obama continued.

Obama went after what he called the “rhetoric” which “gets worse” annually, and for members to focus on where they agree. He cited a “balanced approach” to a budget process as one of these areas of agreement between Democrats and Republicans.

“Had one side not decided to pursue a strategy of brinkmanship, each side could have gotten together and figured out how do we shape a budget that provides certainty to businesses, and people who rely on government?” Obama said.

He added that “comprehensive immigration reform” and a farm bill should also be the focus of the Congress for the rest of the year.