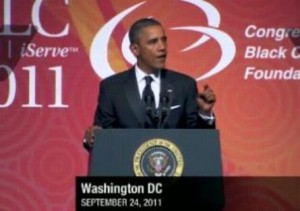 Last night, President Barack Obama spoke at an annual dinner hosted by the Congressional Black Caucus where he went after Republicans for not getting behind the American Jobs Act, and called on his allies to “march with [him] and press on” rather than “complaining.”

The president touted his economic accomplishments while admitting that the United States’ economic problems were never going to be solved overnight. He once again called for Republicans to come together with him and pass the jobs bill he proposed in his address to a joint session of Congress several weeks ago. He argued that his plan would include tax cuts for thousands of small businesses, so he didn’t understand why the Republicans would be so opposed to it.

Obama directly addressed the crowd and asked for their assistance in getting in passed.

I need your help. We have to do more to put people to work right now. We’ve got to make that everyone in this country gets a fair shake, and a fair shot, and a chance to get ahead. And I know we won’t get where we need to go if we don’t travel down this road together. I need you with me.

Towards the end of his speech, Obama amped up the rhetoric and made his case for continuing to fight for the bill.